A series of graphs of air quality data in Scotland have been prepared using the latest figures up to and including 2019 and are presented below. These graphs have been produced using the Openair tool available via this website.

The trend analyses were done using the openair 'TheilSen' tool. This uses the Theil-Sen statistical method to determine trends in pollutant concentrations over several years. The de-seasonalise option (i.e. statistically modify the plotted data to remove the influence of seasonal cycles, thus providing a clearer indication of the overall trend over the relevant time) has been used in all the Theil-Sen trend graphs presented here.

All the sites featured in this section have been in operation for a minimum of 5 consecutive years, as this is usually considered to be the minimum required to assess long-term trends at a monitoring site.

Use the links below to navigate to the section you are interested in. Clicking on the graphs will open them in a new window.

In Scotland (as elsewhere in the UK), the largest number of AQMAs have been declared in response to exceedances of the NO2 objectives. This is also reflected in the number of monitoring stations reporting exceedances for this pollutant. In particular, the objective of 40 µg m-3 for annual mean NO2 concentration is the most widely exceeded. Therefore, it is important to understand how concentrations of this pollutant vary with time.

NO2 at Urban Background sites

There are relatively few long-running urban background monitoring stations in Scotland. Five urban non-roadside sites have been in operation for the past 15 years. These are as follows: Aberdeen Errol Place, Edinburgh St Leonards, Fort William, Glasgow Anderston and Grangemouth. Fort William is classified as a ‘suburban’ site, Grangemouth is an ‘urban industrial’ site, and the other three are ‘urban background’.

The Openair Theil-Sen function has been used to quantify trends in NO2 at these five urban non-roadside monitoring stations, over the 15-year period 2006-2019: the trend plots for NO2 are shown in Figure 1. Please note that both Edinburgh St Leonards and Glasgow Anderston have large gaps in their 2014 and 2015 datasets: as stated above, where there are gaps in the data, Openair fills these in using an interpolation method.

All sites shown in Figure 1 display highly significant negative trends (at the 0.001 level) over this time period. This is a change from previous reports in this series were analysis has shown that Aberdeen Errol Place, Fort William and Grangemouth were significant negative trends at the 0.05 level. This analysis indicates that the downward trend in NO2 concentrations is becoming more substantial over this time period.

Figure 2 takes into consideration analysis from all urban background site in Scotland over the past five years, which includes sites Dundee Mains Loan and Glasgow Townhead. As can be seen the down trends are not as consistent across all sites with only Aberdeen Anderson Drive and Fort William retaining their highly significant downward trends. Glasgow Townhead, Edinburgh St Leonards and Grangemouth show downward trends but not at highly significant as in Figure 1. Dundee Mains Loan (not statistically significant) and Glasgow Anderston (highly significant) show increasing trends contradicting the perception that NO2 concentrations are decreasing at all urban background sites. 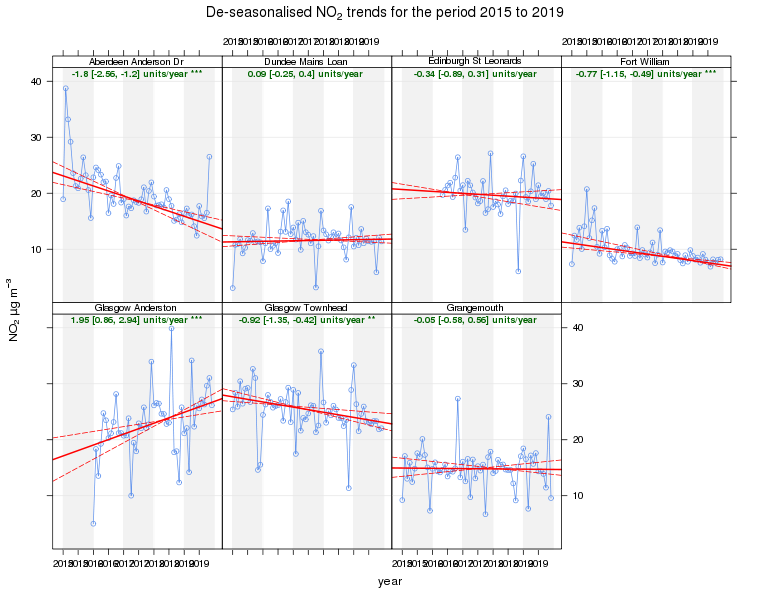 NO2 at Rural Sites

There are three long-running rural sites which have monitored oxides of nitrogen for more than 10 years: Bush Estate (to the south of Edinburgh close to the Pentland Hills Regional Park), Eskdalemuir and Glasgow Waukmillglen Reservoir. Figure 3 shows trends in NO2 concentration at these sites.

The sites at Bush Estate and Eskdalemuir showed small but highly significant downward trends. However, this was not the case for Glasgow Waukmillglen Reservoir, where concentrations were decreasing very slightly year-on-year, though the trend was not significant. This has not changed from previous reports in this series. 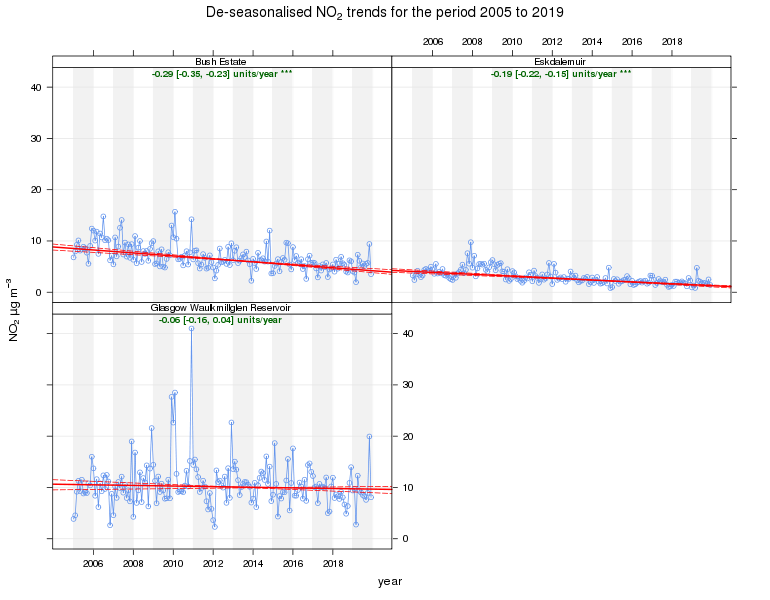 NO2 at Urban Traffic Sites

This is a large number of sites, so for the purposes of this report we have selected eight of the above long-running sites which have measured exceedances of the Air Quality Strategy Objective for annual mean NO2 (40µg m-3) in recent years (though not necessarily 2019). These are as follows: Aberdeen Union Street, Aberdeen Wellington Road, Dundee Lochee Road, Dundee Seagate, Edinburgh St John’s Road, Glasgow Kerbside (Hope Street), N Lanarkshire Chapelhall, Perth Atholl.

Figure 4 shows the trend plot. As with the previous report in this series (the 2018 edition), all eight sites show highly significant downward trends (at the 0.001 level).

Trends over the most recent five complete years, 2014–2019, have also been examined for these sites. These are shown in  Figure 5. Comparing the ten-year and five-year trends, the patterns are similar in that they all have downward trends but of varying significance. At Aberdeen Union, Dundee Seagate, Edinburgh St Johns Road, N Lanarkshire Chapelhall, and Perth Atholl Street, the downward trend has become greater in magnitude over the past five years compared to the past 10. Glasgow Kerbside (Hope Street) is the only site out of this group that shows a reduction in the decreasing trend and the statistical significance going from highly significant to significant.

Figure 4 - Trends in NO2 Concentrations at Eight Long-running Urban Traffic Sites with Exceedances, 2010-2019 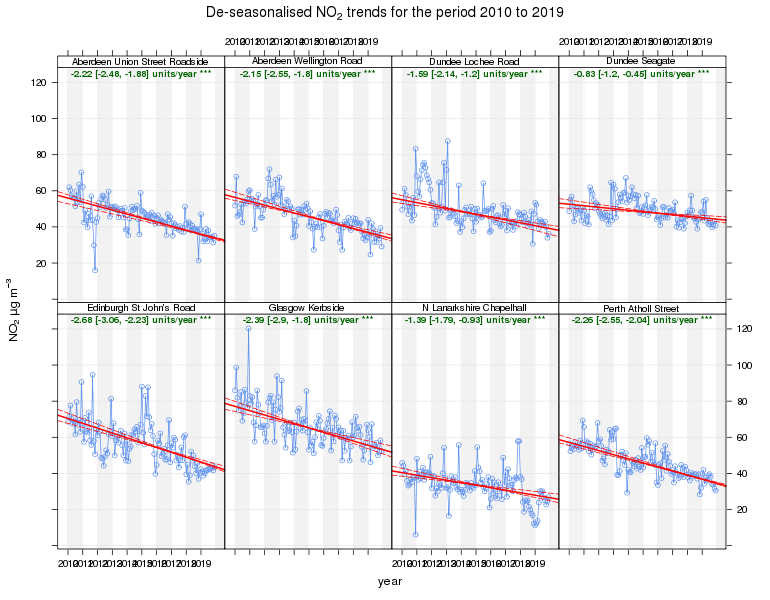 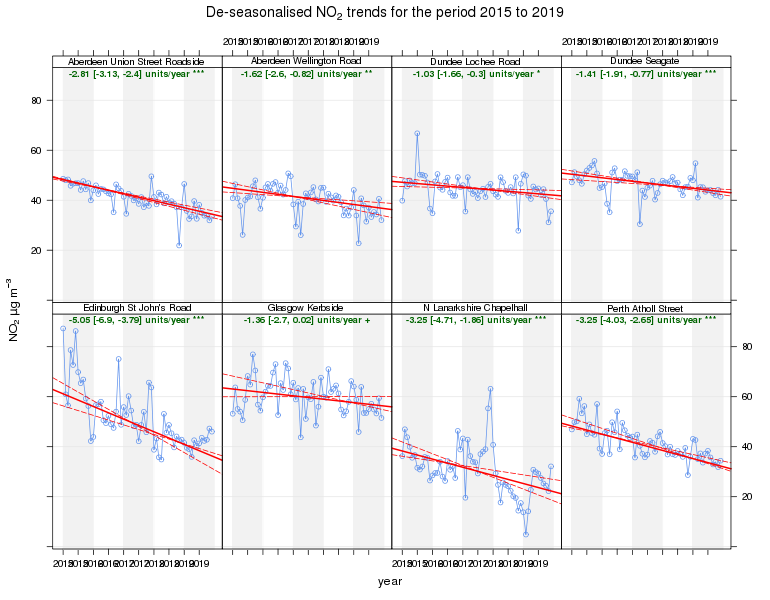 This pollutant is of particular interest because:

During the period covered by this trend analysis, many of Scotland’s monitoring sites have used the Tapered Element Oscillating Microbalance (TEOM) to monitor PM10. For the reasons discussed in Section 5 it is necessary to correct TEOM data for possible evaporation of the volatile component (due to the high operating temperature of the TEOM, necessary to prevent condensation on the filter). For years up to and including 2008 the conventional way of doing this was to apply a factor of 1.3 to the data, and the data presented here for those years have been adjusted in this way. However, in 2009 a better correction method became available: the King’s College Volatile Correction Model (VCM), which can be found at http://www.volatile-correction-model.info/ . This model uses measurements from nearby FDMS-TEOM instruments (which measure both the volatile and non-volatile fraction) to calculate and apply a correction to the daily or hourly dataset. This is now the recommended method and has been used for the data presented here for years 2009 onwards, from sites where the TEOM are still being used. Over the past four years the number of TEOM and FDMS-TEOM used to measure particulate matter has significantly reduced. 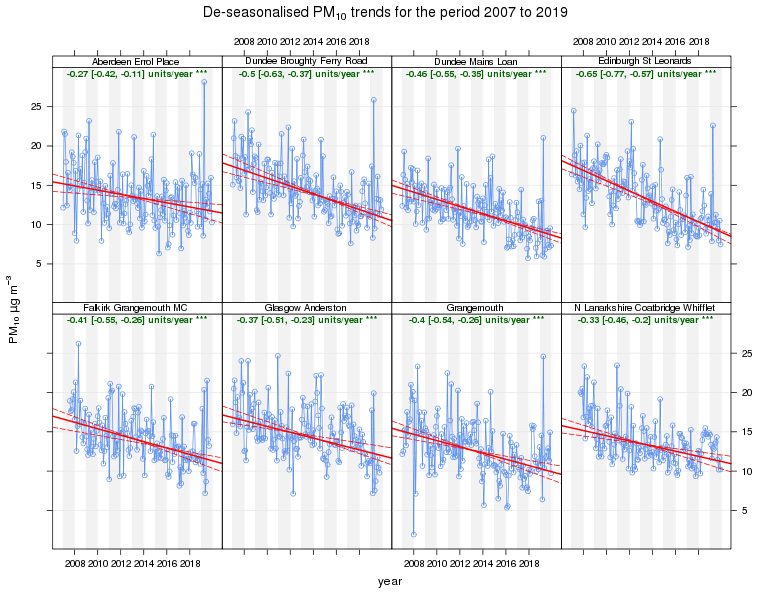 There are 34 PM10 monitoring sites in Scotland that have been monitoring for over 10 years. These are as follows;

Trends in de-seasonalised monthly mean PM10 concentrations for eight traffic-related sites in operation since 2009 or earlier are shown in Figure 7. The sites selected for this analysis are Aberdeen Wellington Road, East Dunbartonshire Bearsden, Edinburgh Salamander, Fife Cupar, Glasgow Abercromby Street, Glasgow Byres Road, Perth Crieff and West Lothian Broxburn. These sites were chosen to be analysed because; of the length of time they have been monitoring (10 years or more), present or historical exceedances of the annual mean objective and geographical coverage.

All sites showed highly statistically significant downward trends (at the 0.001 level), with the exception of Glasgow Abercromby Street which was significant at 0.05 level. The trends indicate that PM10 over the past 10 years is decreasing year on year at these roadside sites. The exception to this however is Glasgow sites Abercromby Street and Byres Road where in recent years the trend appears to level off or even increase.

Trends in de-seasonalised monthly mean PM10 concentrations for the same eight sites (plus Edinburgh Queensferry Road), for the most recent five complete years 2015 – 2019, are shown in Figure 8. Figure 8 shows that PM10 concentrations over the past 5 years at Glasgow sites Abercromby Street and Byres Road have increased rather than decreased as with the 10 years analysis. In addition, statistical analysis of Edinburgh Queensferry road has also indicated an increase trend over the last five years. For the other sites analysed the decrease seen over the last five years is far less compared to 10 years. This shorter-term trend analysis highlights that the long-term downward trend has not continued everywhere over more recent years and concentrations may either be levelling off or increasing. 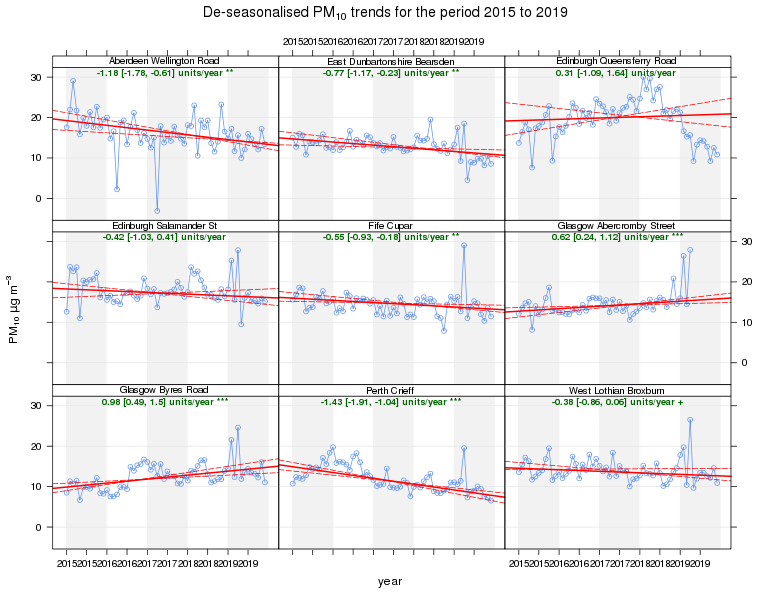 In earlier years, most monitoring of particulate air pollution was focused on the PM10 size fraction. However, the finer fractions such as PM2.5 are now of more interest in terms of health effects. Fine particles can be carried deep into the lungs where they can cause inflammation and a worsening of the condition of people with heart and lung diseases. They may also carry harmful compounds, absorbed on their surfaces, into the lungs.

At the time of writing this report there are 69 sites monitoring PM2.5 in Scotland. However, the vast majority of these sites started monitoring in the last three years with the introduction of the PM2.5 objective and the requirement for local authorities to measure the pollutant.  By the end of 2019 there were four sites with 10 consecutive years of PM2.5 data. These sites are as follows: Aberdeen Errol Place (urban background), Auchencorth Moss (rural), Edinburgh St Leonards (urban background), and Grangemouth (urban industrial). The trend plot for these sites is shown in Figure 9. Previous reports in this series have provide trend analysis for daily PM2.5 concentrations at the Inverness site, which used to monitor daily mean PM2.5 concentrations using a Partisol gravimetric sampler. However, in July 2018 the Partisol was replaced by an automatic Fidas instrument, so Inverness now monitors PM2.5 concentrations on an hourly basis.

Three of Scotland’s rural air quality monitoring stations have been monitoring ozone for 31 years, 1986-2019. These are Bush Estate, Eskdalemuir and Strath Vaich. Figure 10 shows long-term trends in de-seasonalised monthly mean ozone (O3) concentrations at these three exceptionally long-running rural monitoring sites. All three sites showed a small upward trend in monthly mean rural ozone concentrations over this period. For Bush Estate and Eskdalemuir this trend was highly statistically significant at the 0.001 level. For Strath Vaich the trend was smaller and was not statistically significant. The charts also show considerable fluctuation; this may reflect the fact that ozone is formed by reactions involving other pollutant gases, in the presence of sunlight. Thus, ozone concentrations depend substantially on weather conditions. There is also evidence that the “hemispheric background” concentration of O3 has increased since the 1950s due to the contribution from human activities. 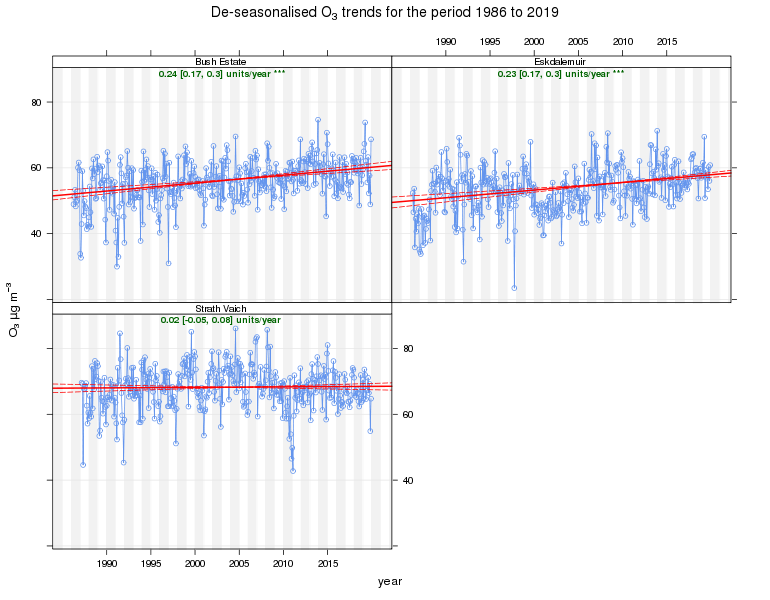 Six sites have been in operation for over 10 years. These are the above three sites, plus Auchencorth Moss, Glasgow Waukmillglen Reservoir and Lerwick. Trends in ozone concentration at these six sites are shown in Figure 11. In contrast to the 30-year trends, the ten-year trends were less consistent. Five of the sites showed increasing trends with varying levels of statistical significance. The remaining site, Glasgow Waulkmillglen showed a not statistically significant decreasing trend. 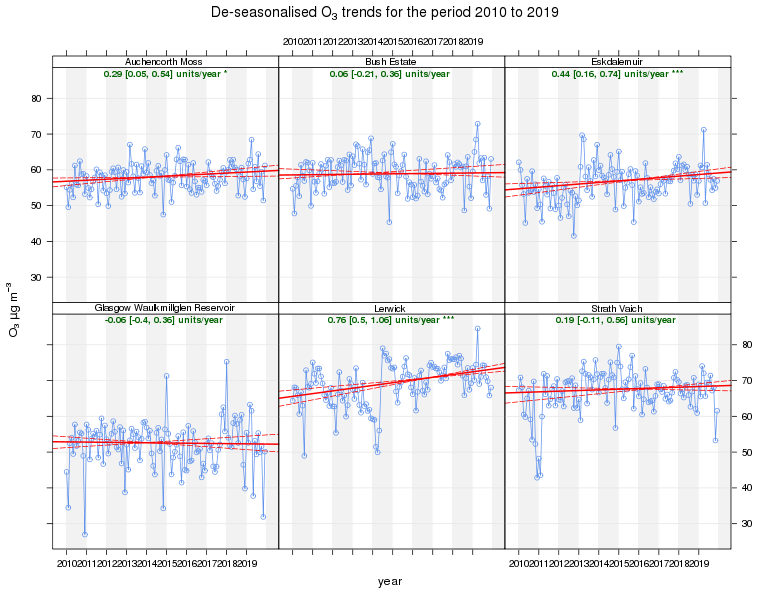 There is again an upward trend at all three sites, highly significant at Aberdeen Errol Place and St Leonards

At Edinburgh St Leonards there was a noticeable dip in measured ozone concentrations throughout 2010 and into 2011. The reason for this is unknown and an investigation of these low data has confirmed that the analyser was operating within its usual parameters throughout 2010 – 2011.  Since no reason could be found to discard the data, they must be assumed to be genuine.

Contrary to other pollutants analysed in this section, there appears to be an (though not always statistically significant) upwards trend in ozone concentrations. This is consistent with previous years’ reports.